Update from the Field: Take a Stand on Corn Population

This post may reference products and/or services only available to our Retail Farm Center customers. For more information contact your Territory Manager at The Andersons.

In recent years we have been told, by seed companies, that seeding population has a direct relation with yield. I somewhat agree with that statement. When we increase the population evenly we will increase yield, but will yield continue to increase indefinitely? Technology has made it possible to increase the planting population as high as 65,000 seeds per acre while keeping seed spacing greater than 7 inches. This begs the question, just because we can should we?

The average harvested population of corn plants, reported by the Indiana Corn Growers Association, has been steadily increasing by 310 plants/acre/year over the past 20 years (Figure 1). The trend corn yield increase on average is 1.85 bushels per year (Figure 2). This would suggest that there is a direct relationship with ending plant population and yield.

RL Nielsen, Jason Lee, John Hettinga, and Jim Camberato from Purdue University released a study in February 2017 titled “Yield Response of Corn to Plant Population in Indiana”. Their study followed 89 field size trials around Indiana since 2008. The field sizes ranged from 30 to 100 acres and used a combination 30 inch and twin-row planter’s row spacing. The population ranged from 25,000 to 42,000 seeds per acre. The study used actual plant population, not seed population, which ranged from 79% to 100% of the seed population. The results were very interesting. The 89 field scale trials around Indiana suggested that agronomic optimum plant population under “normal” growing conditions is approximately 31,600 plants per acre. This equates to a planting population of 33,250 seeds per acres at a 95% germination rate.

The nine year study from Purdue University seems to suggest that there is not a direct relationship between corn population and yield, but more of a bell curve, with 33,250 seeds per acre at the pinnacle of the curve (Figure 3). The interesting question is “Why do we see a bell curve relationship between population and yield instead of a direct increase?” Dr. Nielsen suggests a couple of possibilities. First is lack of sunlight. With the increase in population, more of the growing corn plant will be shaded, preventing photosynthesis. Second is increase in disease. When plants are pushed closer together the environment becomes darker and more moist, which will encourage the development of diseases.

In conclusion, it seems that we as Ag advisors should recommend a seeding population between 33,000 and 34,000 plants per acre. If the field has a risk of becoming droughty, moving the recommended population to around 30,000 plants per acre seems to be a wise move. Just remember, more is not always better when it comes to population. 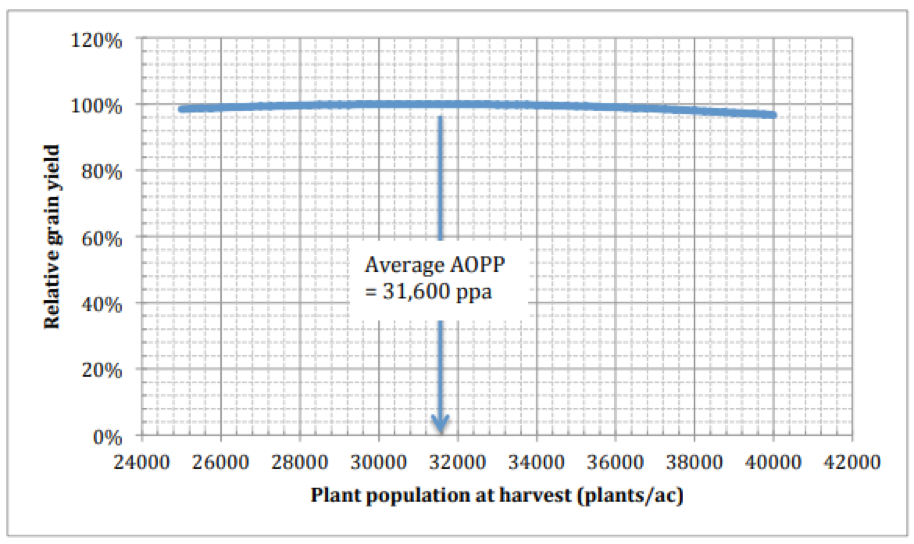